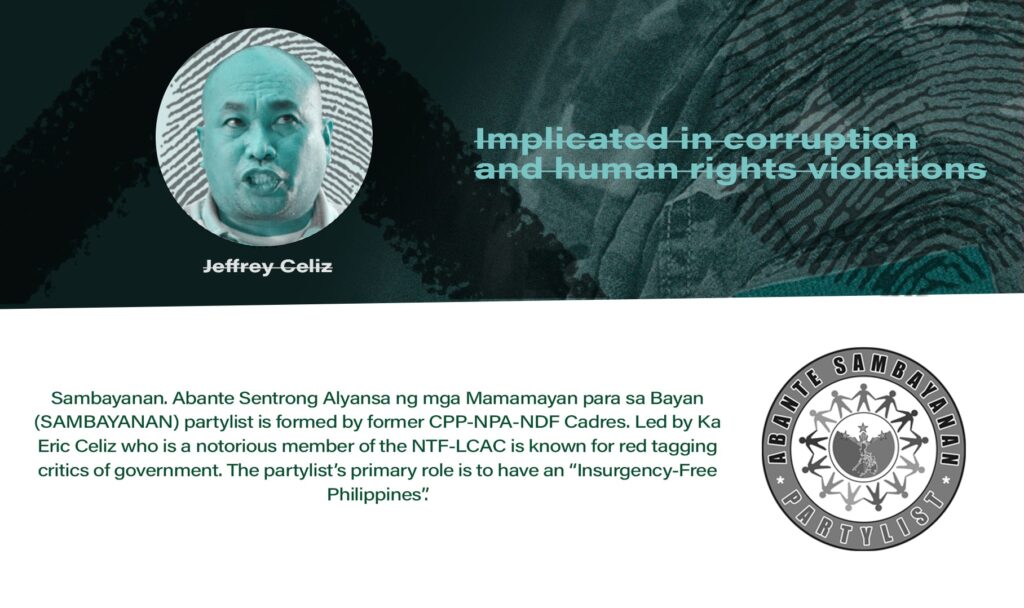 Background Sambayanan. Abante Sentrong Alyansa ng mga Mamamayan para sa Bayan (SAMBAYANAN) partylist is formed by former CPP-NPA-NDF Cadres. Led by Ka Eric Celiz who is a notorious member of the NTF-LCAC is known for red tagging critics of government. The partylist’s primary role is to have an “Insurgency-Free Philippines”. 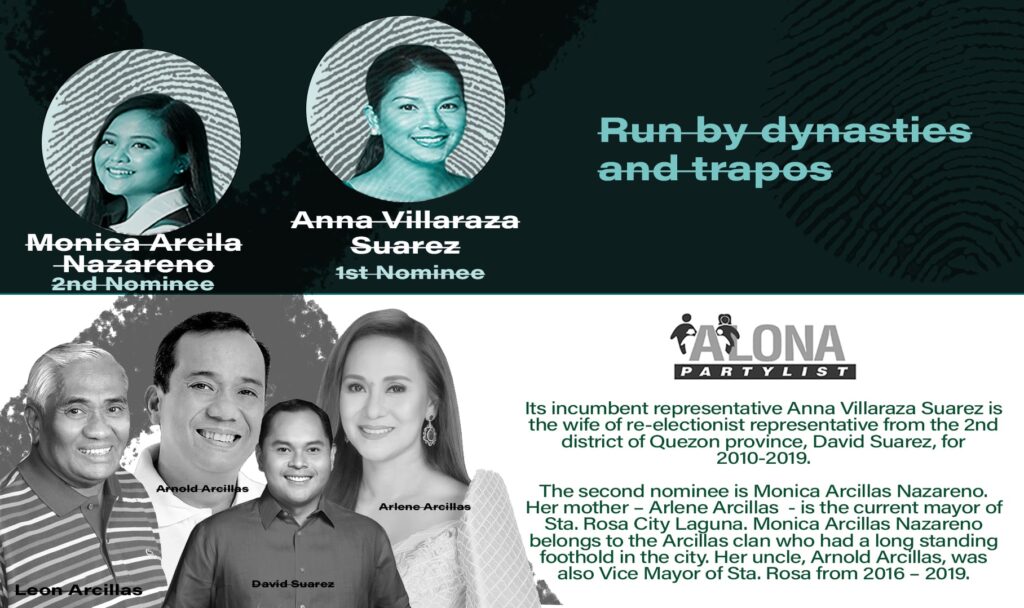 Background ALONA or the Alliance of Networks and Associations purports to be a party-list that fights for general poverty alleviation. Aside from their own social media releases showing members involved in feeding programs during election season, there is little public information available regarding any concrete platforms or advocacies. Dynasty Its incumbent representative Anna Villaraza Suarez […] 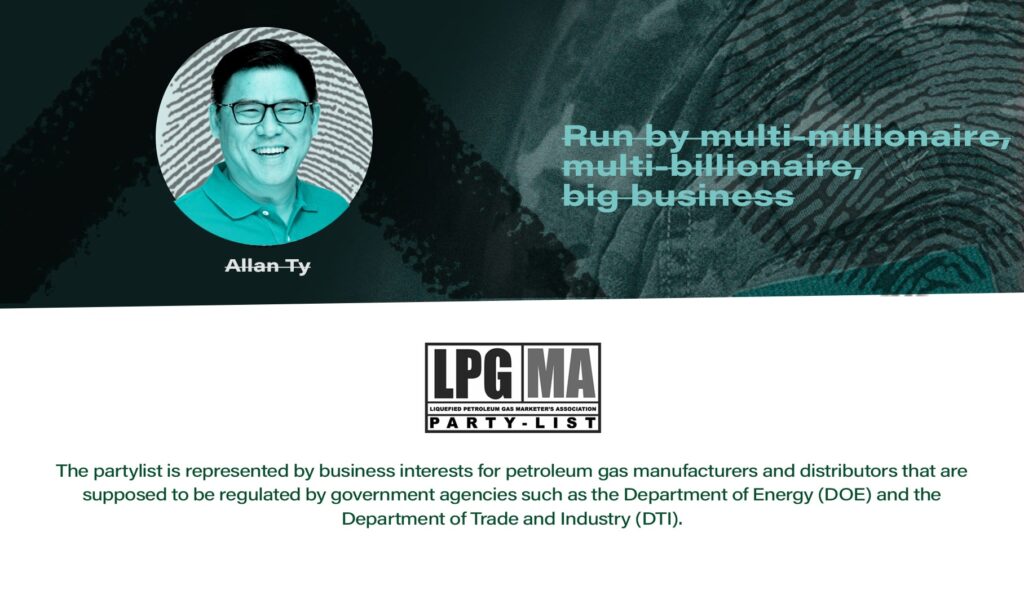 Background The LPGMA partylist promotes two main platforms: 1) advocating for safety in the production and distribution of LPG products 2) promoting safety in general whether in the workplace, school, family, or community relationships. More broadly, LPGMA represents the liquified petroleum gas and energy industry that seeks to increase sales of related products to consumers. […] 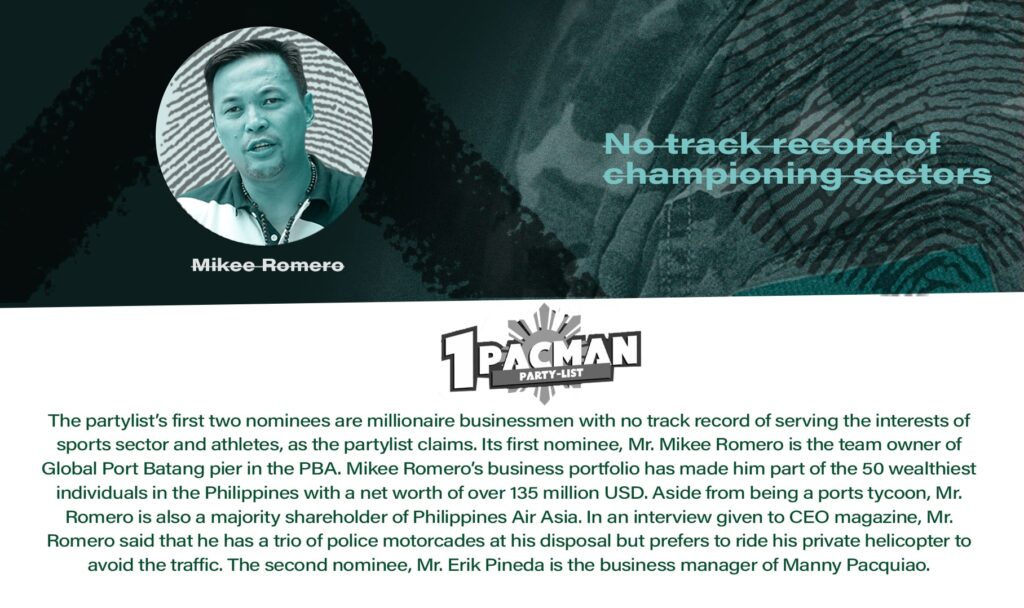 Background 1-PACMAN is a partylist that claims to broadly support the marginalized sector. Along its other platforms include sports development, education, and jobs creation. The group has gotten the endorsement of top personalities including Manny Pacquiao who is the party’s namesake. The party has ran successfully in 2016 and 2019 both winning two seats. The […] 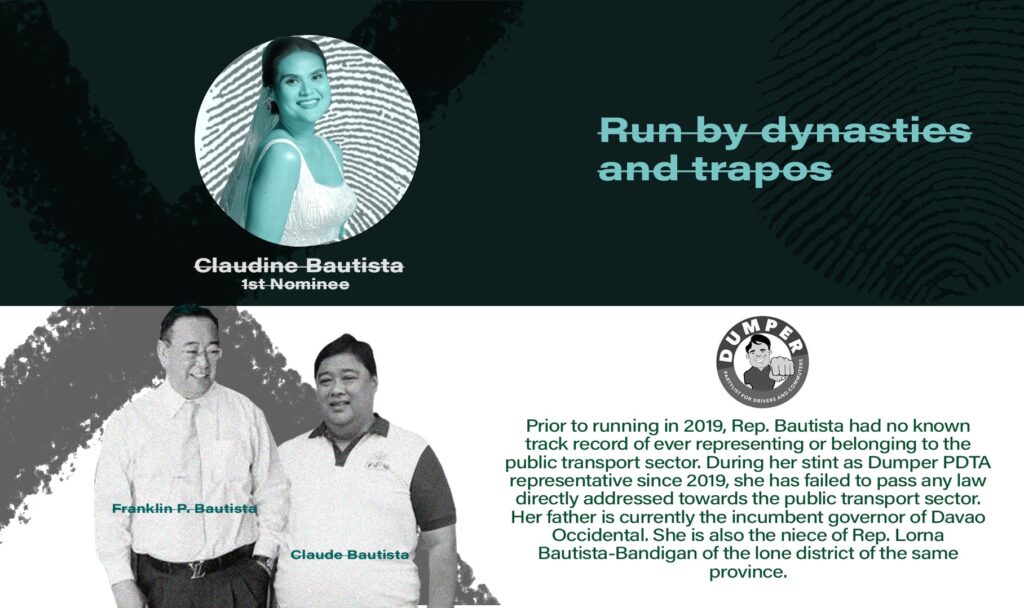 Background The Drivers United for Mass Progress Philippines and Equal Rights – Philippines Taxi Driver Association (Dumper PDTA) is a party-list that purports to represent public utility drivers and commuters. Its representative is incumbent representative Claudine Bautista, currently the Vice-Chairperson on the committee on transportation. In August of 2021, news surfaced that Representative Bautista celebrated […] 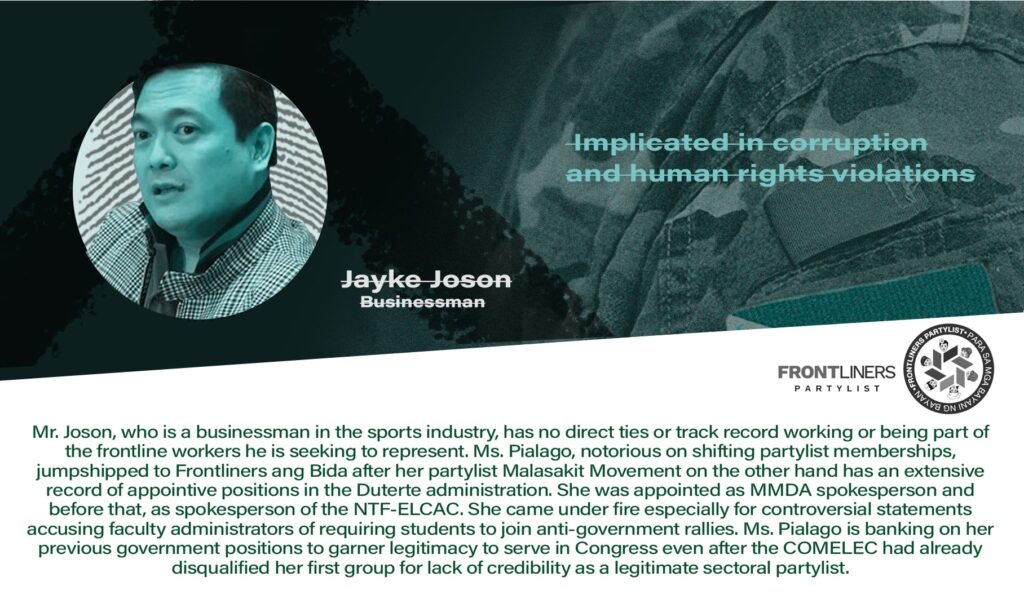 Background Frontliners ang Bida is a partylist that broadly aims to support and provide livelihood to frontliners during the pandemic. One of its officials and nominee Jayke Joson was a businessman and ex aide to Senator Manny Pacquiao.  The two had a falling out over a failed deal involving a planned fight between Pacquiao and […] 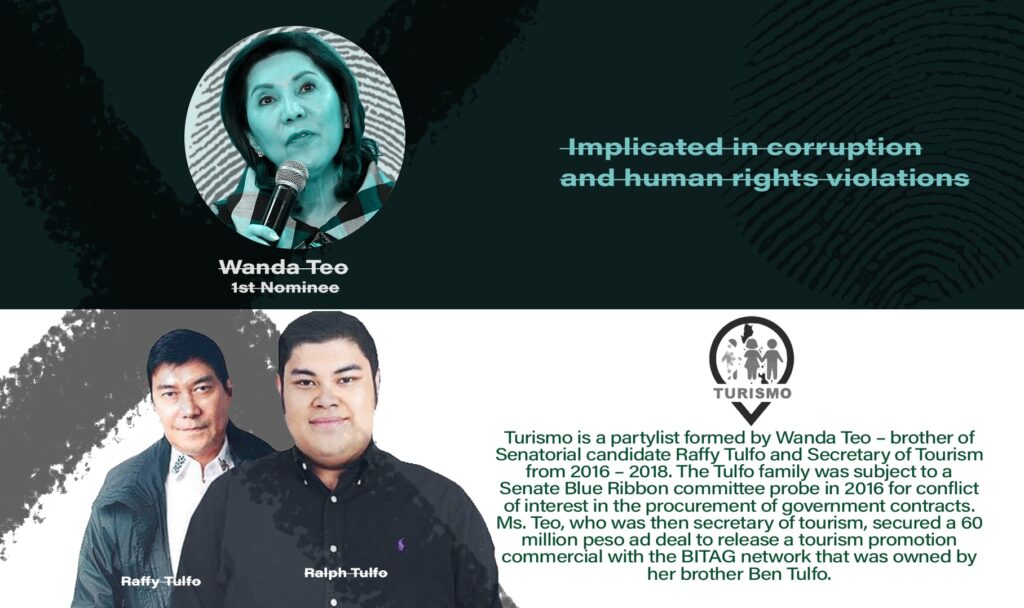 Background Turismo is a partylist formed by Wanda Teo – brother of Senatorial candidate Raffy Tulfo and Secretary of Tourism from 2016 – 2018. The Tulfo family was subject to a Senate Blue Ribbon Committee probe in 2016 for conflict of interest in the procurement of government contracts. Ms. Teo, who was then secretary of tourism, secured […] 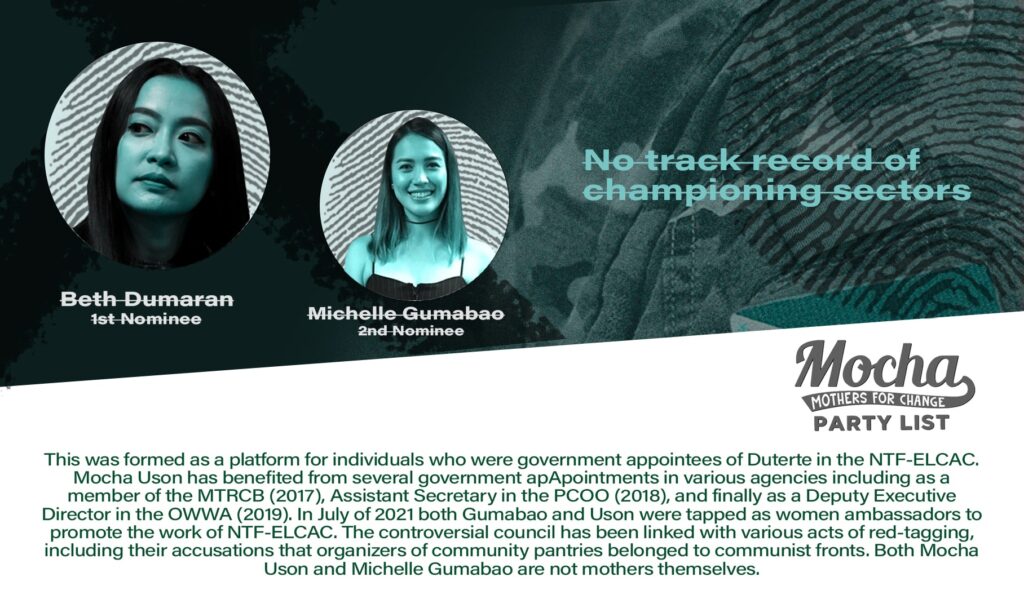 Background Mothers for Change is a new partylist formed by former PCOO assistant secretary and Duterte ally Mocha Uson. She is running as its first nominee, together with Michele Gumabao – a former beauty pageant and Ms. Globe contestant – as the second nominee. The group has been roundly criticized given that neither nominees are […] 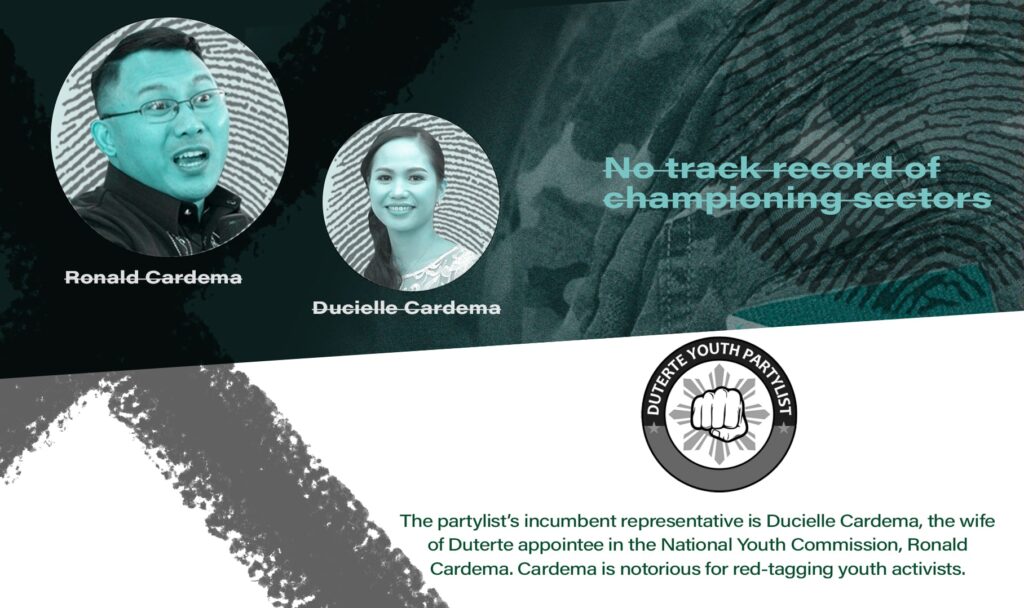 Background Duterte Youth or Duty to Energize the Republic through the Enlightenment of the Youth was originally formed in 2016 in support of Rodrigo Duterte’s presidential bid. Its founder Ronald Cardema was eventually appointed as chairman of the National Youth Commission. In 2019, Duterte Youth ran in the party-list election and won one seat. The […]