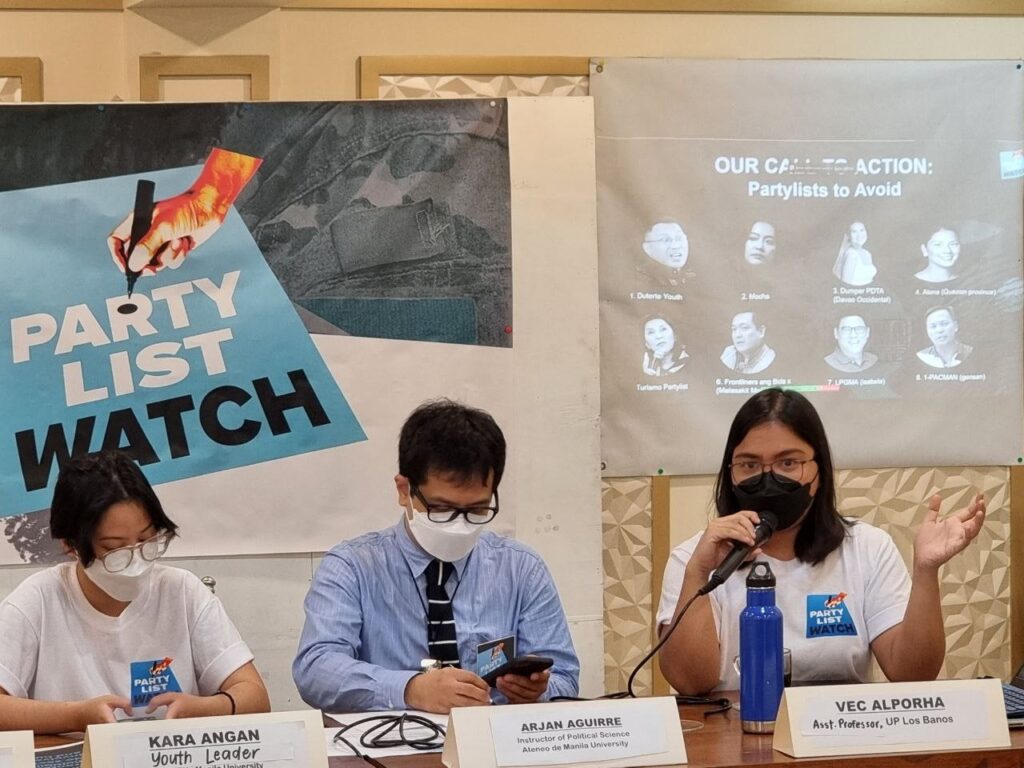 Election watchdog Partylist Watch (PL Watch) today sounded the alarm bells on what it called an invasion of the partylist system by the political and economic elite. The group warned that fake partylists are now at the cusp of completely dominating the system due to their ties to political dynasties, traditional politicians and multimillionaires/billionaires.

“What we observed is an invasion of the partylist system by elite interests representing political dynasties, big business, and corrupt forces. If this continues unabated, from invasion, the partylist system will eventually be fully occupied by fake partylists,” according to Vec Alporha, University of the Philippines – Los Baños Assistant Professor and one of the convenors of Partylist Watch.

PL Watch said that while there are numerous groups that fit its description of questionable partylist groups, it mentioned the following as the most notorious examples:

Alongside the list, the group also launched a “Fake PL Detector” to guide voters on which partylist groups they should consider and which ones they should reject. The Fake PL detector warns voters against partylists that are:

“These groups have exemplified the most blatant abuse of the partylist system: to expand their political dynasties and protect their business interests. Voters should not think twice in rejecting these fake partylist groups,” Alporha said.

Based on PL Watch’s initial study, of the 177 partylists in the 2022 elections: 92 are new partylists, 85 have participated in past races, almost half of partylists are led by political dynasties, at least 36 are linked with ex-politicians and government officials, and at least 26 are associated with big business. There are also eight new partylists that are led by former appointees of President Rodrigo Duterte who do not have any previous partylist engagement.

For his part, Mr. Arj Aguirre, an expert on electoral politics, said that voters must not forget that the partylist system is meant to open the space for a more meaningful participation of the ordinary Filipino people in policy making and deliberation of issues in the society. “Let us be reminded that this is one of the legacies of EDSA 1986 that was enshrined in our constitution. The law that was passed is oriented toward this vision and goal — that our government will become a tool to help the marginalized and downtrodden,” he said.

Aguirre said that there is a decades-old effort from elitist and powerful forces to expand their control of the institutions of power in government. “It reveals to us a calculated and well-coordinated cooptation of the partylist system: a. exploiting the weakness of the partylist law especially on who can participate as a partylist group and who can represent that group in the House of Representatives, b. strategizing their electoral success by using their excessive wealth, popularity among the people and inclination to violence, and c. modifying the role of partylists by making them an ally and even a champion of elitist interests in the government,” he added.

PL Watch is a partylist monitoring group comprised of academics, election reform advocates and sectoral leaders. It is pushing to reform the country’s partylist and political party system, as well as passage of measures such as the Anti-Political Dynasty Law, state support for real political parties and partylist groups, and strong regulation of campaign financing.#